5 Strategies That Prevent Most Misbehavior

"Okay, you've convinced me not to punish. But my two year old still bites, has tantrums, throws his food and scribbles on the furniture...."- Rebecca 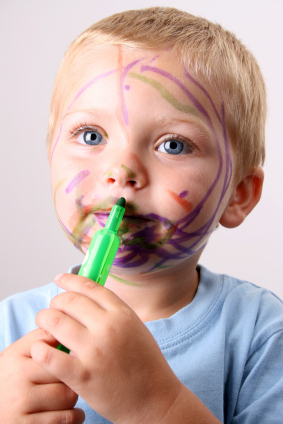 Unfortunately, a two year old's frontal cortex is still developing the ability to control his emotions and behavior. That means they throw food, break things, have meltdowns, bite when they're mad, and scribble on the furniture. In other words, they act like two year olds.

And since the brain is still developing through the teen years, even older kids sometimes lack the rational control to behave as we've taught them. So even 15 year olds can act like 2 year olds at times! (Of course, we adults, with our fully developed brains, never have tantrums or act childish, right?)

So you can't always prevent your child acting out, whether he's a toddler or a teen. But here are the five best strategies for preventing misbehavior, and for turning around tough situations, for all age kids.

Often, children act out simply because they feel disconnected from us, so what we want doesn't matter to them. And when humans lash out -- biting, breaking things, defiance -- it's because they feel afraid or hurt. Those upsetting feelings disconnect them from us, even if the relationship is usually close.

Since your child's motivation to "behave" comes from his connection with you, you have to re-establish the connection before you can influence his behavior. So as soon as you see your child getting upset or simply pushing the limits of acceptable behavior, move in close and re-connect:

Sometimes that's enough to turn things around, especially if you can then move into....

Children process emotion through play, so you can often prevent "misbehavior" by helping your child channel her big feelings into giggles. For instance, toddlers need regular fun throwing games where they can satisfy those throwing impulses. Try beanbag tossing into a bucket, or balls outside, or tossing stuffed animals down the stairs. Watch, compete (badly, so you always lose), admire her throwing, and be silly to get your child giggling. All young children need lots of physical roughhousing that gets them laughing, as well as games where they get to feel powerful:

"You're just too fast for me! How come you always win?!"

The more laughter, the less misbehavior.

So when your child is beginning to push the limits, you might grab her up in your arms and say: "Are you out of hugs again?!"

"We're growly, growly puppies... anyone who comes close gets a big puppy lick!"

Compete with each other to see who can growl most fiercely until you're both giggling and the whole mood changes. (Adapt this for older kids. I find pillow fights essential to life with tweens and teens.)

Unless, sometimes, things have gone too far and your child just needs to express all those tears and fears, and play won't shift the mood. Then you....

When your child is cranky or defiant and play doesn't shift the mood, he's asking for your help with his big feelings. All humans carry a figurative "emotional backpack" where we stuff any emotions we don't feel safe enough to experience at the moment. When those feelings are pushing to come up and be expressed, kids get anxious. They feel disconnected from us. They show this by refusing to cooperate. When we ignore these signals, we can be sure our child will soon escalate and lash out.

Instead, prevent "misbehavior" by proactively noticing crankiness, defiance and moodiness. Instead of ignoring those mood changes, helping your child surface and express his upset. How? Create safety. Muster as much compassion as you can. Move in close and look him in the eye. If necessary, put your hand on his arm to stop him from throwing, or on his belly to stop him from moving toward his sibling. Set your limit as kindly as you can:

"You're mad... tell me in words. No hitting; hitting hurts."

Hopefully, he'll melt into tears. More likely, he'll first turn his anger toward you. If you stay compassionate (and if you've been maintaining a close connection with lots of play and special time), he'll often feel safe enough to show you the tears and fears behind the anger. Welcome those emotions. Sometimes fear looks like a tantrum, whether two or ten, but he needs the "holding environment" of your warm presence to experience those feelings he's been stuffing.

The good news about emotions is, once we feel them, they begin to evaporate. After his meltdown, your child will feel more relaxed, affectionate and cooperative.

The younger the child when you start "allowing" emotions, the faster he'll "befriend" them, the better he'll control them as he grows, and the fewer meltdowns you'll see. But even older kids will sense the safety you're creating and "show" you what's upsetting them. Just keep breathing and don't take their anger personally.

Does this mean you ignore verbal attacks? No. You acknowledge them and invite expression of the deeper tears and fears behind the anger.

"Ouch! You must be so upset to speak to me that way. What's wrong, Oliver?"

Then you listen, and acknowledge his feelings. Later, your child will probably offer a spontaneous apology for his earlier rudeness. If not, you can certainly comment later on respectful language being one of your house rules. (Of course, you'll need to be the role model.)

Of course, none of this stops you from setting limits. It's our responsibility to guide our kids. But all humans resist being controlled. Kids of all ages are more likely to follow our guidance when we understand their perspective. (It's also easier for humans to redirect an impulse than to stop it completely.)

"Food is not for throwing! Are you showing me that you're done eating? Say 'Done, Mommy' and I will help you get down....Since you want to throw, Let's get your beanbags."

"I know, it's hard to stop playing and get ready for bed. I bet when you're a grown-up, you'll never sleep! You'll just play all night long every night, won't you? Right now, though, it's time to get ready for bed."

5. Regulate your own emotions.

When we react by throwing our own parental tantrum, it always makes things worse. If you can regulate your emotions, you can always calm the storm. That's what teaches kids to manage their own emotions. Which is what allows them to manage their behavior.

Not surprisingly, you can count on kids exhibiting childish behavior. But these 5 tools -- Connect, Play, Emotion-Coach, Set limits with empathy, and Regulate your own emotions -- will give any age child the support he needs to be his best self most of the time.

And when he can't? Just keep your sense of humor and remind yourself that this stage won't last forever. Some day soon he'll move on to much more interesting ways of driving you crazy.