When You Just Don't Have Time for The Meltdown

"How would you handle a situation when you have to leave the park to go get your other two children and unfortunately can't sit on the bench for thirty minutes while she cries?" - Sandra 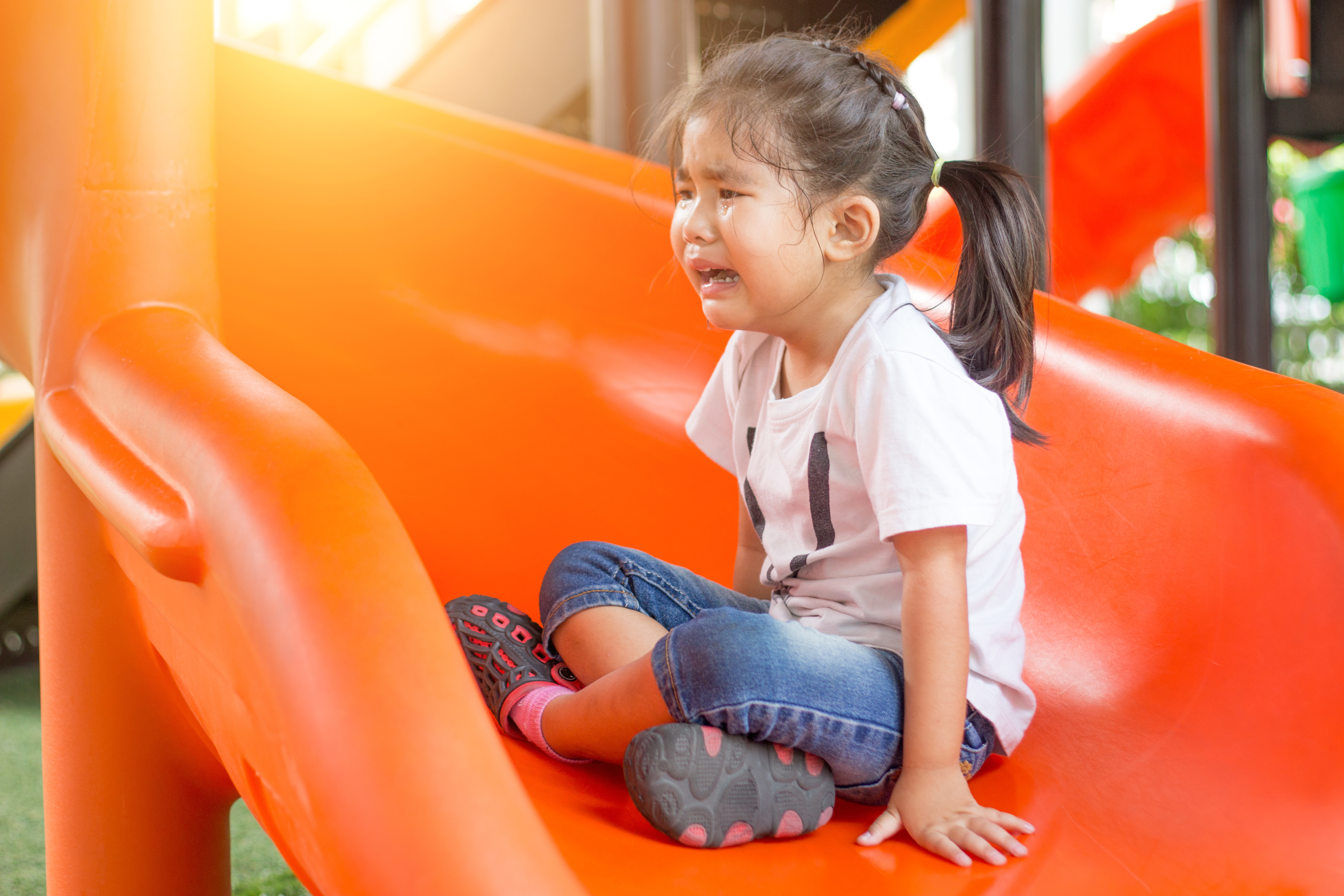 Sometimes your child just needs to cry, either because of a new disappointment, or some old feelings they're lugging around in their emotional backpack.
If you've been reading these posts for awhile, you know that children's behavior is driven by their needs and emotions (just like adult behavior.) So if you want the behavior to change, you have to address those needs and emotions.

That means you have to make it safe for your child to show you the tears and fears that are driving their behavior. Otherwise, those hurts stay clenched inside, stored in the emotional backpack. They come bubbling up whenever your child suffers even a small disappointment.

So, you sometimes find yourself sitting on a park bench with a sobbing child. Amazingly, after the meltdown, your child is usually cooperative for the rest of the day, or even the week. Sibling squabbles diminish and your child is unusually affectionate. So any parent who can stay calm enough to support their child lovingly through a big cry usually becomes a convert and starts to embrace tears, rather than shutting them down.

BUT what if you don't have time?  Sometimes, after all, you have other children to go pick up, or "the baby is crawling away putting leaves in his mouth and my toddler is throwing a tantrum on the swing and my 4-year-old is running to the slides because he doesn't want to leave," as Kristin said in response to my post about helping a child leave the playground.

The answer is that sometimes you really don't have time for big emotions. So you do what you can in advance, to avoid the meltdown in the moment.

1. Start early. Since you know that a meltdown is likely, start the process of leaving the park half an hour earlier than you think you need to. Worst case scenario, you'll get to the older child's school early and play at their playground.

2. Remember to acknowledge things from your child's perspective. Of course he doesn't want to leave the playground. When kids feel understood, they're more likely to do what we ask, even if they don't see any benefit for themselves. So EMPATHY is your magic wand. Make sure that your child feels that you've listened, understood, and tried to take his needs into account.

3. Make it worth their while. This is not a bribe. This is an acknowledgment that your child needs something to move towards, and it helps you sidestep the power struggle because it gives your child a way to willingly let go of what he's fighting for. Maybe it's the playground at big brother's school, or the music he can choose in the car, or a snack in the car, or he gets to unlock the car. Maybe he simply needs the choice about whether he hops out of the park like a kangaroo or zooms like a rocket. Whatever gives him a little hit of dopamine when he thinks about it, so he has a reason to get off that wonderful swing.

4. Divide and Conquer. Too many children to corral? Put the baby on your back. Then enroll the four year old in your plan. If he gets excited about leaving, he'll help convince the toddler.

5. When all else fails, pick up your howling child and leave.  If you can manage to grunt out an occasional empathic acknowledgment as you stagger to the car, great -- your child might even feel "heard." If not, just bite your tongue so you don't start screaming. True, you aren't helping your child process her emotions, so you can expect a meltdown later today, over the slightest frustration. But at least she knows you're serious when you say it's time to leave, so you only have to do this once or twice.

Of course, that's also true if you sit on the park bench with her for half an hour, as I described in this previous post, and it's easier for you to stay calm using that approach. But when you have another child waiting, this child's meltdown will just have to happen in the car. Hopefully, you can get the other kids safely into the car and occupied with music and snacks, and then listen and empathize with your upset child. But there are times when even that's impossible due to time constraints, and you just have to drive.

Here's the catch. Every time you ignore your child's emotions, you're asking her to stuff them. If she doesn't get another opportunity to work them through, they'll drive more "bad" behavior. So the bad news is that while sometimes feelings just have to wait, when you can't listen to your child's feelings you'll usually see worse behavior later.

But the good news is that many meltdowns like this can be avoided to begin with. Preventive maintenance to help your child process emotions minimizes meltdowns and increases cooperation. And if you have more than one child, you certainly can't always be available for meltdowns when your child "blows" -- so that means that if you have more than one child, your primary parenting strategy needs to be prevention.

So how can you use Preventive Maintenance? That's our next post!

“After playing an imaginative game of a human-eating whale, it was time to leave the playground. When my son informed me that he ‘wasn’t going,’ as if on cue, my chest tightened. Somehow, through my frustration, I remembered from one of Dr. Laura's books that he might need options for how he wanted to leave the park. After taking a moment to myself to gather up our things, I approached him and said, ‘We need to leave now. How would you like to leave the park?’ He thought for a moment, then decided we should finish our game of the human-eating whale by having the whale swallow a squid that would squirt black ink, making it too dark inside the whale, and the boy would have to come out. Less than a minute later, we were peacefully leaving the park, hand in hand.”—Carrie, mother of a five year old