When Your Toddler Hits You: A Script

"Children naturally lean toward affection and companionship. When you see a child fiercely attacking her loved ones, you can assume that she is sitting on extremely painful feelings. An angry child is quite frightened and sad underneath her tough stance. However small the issue, she feels that something absolutely vital to her is being threatened, and she has no choice but to fight. She also feels alone. As far as she can tell, no one understands her, no one will come to her rescue, and everyone is out to hurt her. - Patty Wipfler 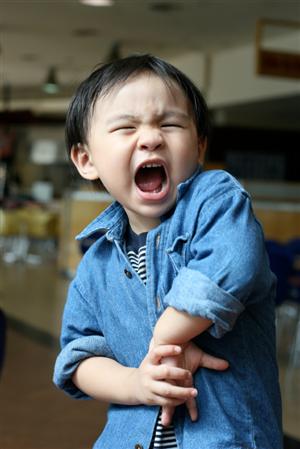 Sam, 2.5, wants something he can't have. Mom says no. Sam flies into a rage and lashes out at her.

Mom: "OUCH!" That's her funny bone, but there's nothing funny about it. In fact, Mom feels like kicking him back.

She's heard that parents should ignore it when kids hurt them, so they won't "get a response," but she knows better. Kids need our clear, firm limits when behavior is off track, or why shouldn't they repeat it? Often, they're lashing out to GET a response. And they need our help to deal with whatever feelings are driving their behavior.

Sam laughs and aims again. His laugh pushes all of Mom's buttons. Can her two year old really be enjoying her pain? She can feel herself sliding onto the low road of parenting, the one where she narrowly resists smacking him, locks him in his room and throws away all his toys.

But Sam isn't laughing because he's enjoying her pain. He's so upset that he can't cry. His laugh is letting off the tension of his upset feelings.

Mom sidesteps the kick and steps back, out of reach. She reminds herself that Sam is tired and hungry and two. She takes a deep breath and repeats to herself: "He's acting like a child because he IS a child." She breathes deeply, working hard to regulate her own emotions.

Sam comes at her again.

Mom puts her hand out to hold Sam off and speaks firmly. She's not yelling, which would heighten the drama and escalate the storm. But she knows that she needs to show Sam she's serious by the intensity of her response: "You are MAD! Still, NO hurting Mummy."

Mom (Reflecting his feelings as she fends him off): "You are so mad you want to hurt? You are really, really mad?"

Sam: (Still flailing, but looking at her now that she's showing him she understands) "MAD!"

Mom: (Looking him in the eye with understanding) "Yes, you are VERY MAD! Show me! Stomp your foot! Shout "MAD!" But NO hurting."

Sam stops flailing at Mom and shouts at her:  "MAD!"

He's looking in Mom's eyes now that he feels understood. With the eye contact, Sam's face crumples, and he begins to cry. Mom gathers him onto her lap. He cries and cries. Finally, he stops, sniffling.

Mom: "Yes, you were sad and mad. You were hurting inside here" She rubs his heart. "So you wanted to hurt Mummy. Right?"

Sam stares at her. Mom knows he's making the connection: He was hurting so he wanted to hurt.

Mom: "So you hit and kicked Mummy. Right? Ouch!"

Sam hides his face in her shoulder.

Mom: (kindly) "You're hiding your face. You feel bad that you hurt me, right? I'm ok. But kicking hurts. No more kicking Mummy. When you feel like hurting, you can tell me you're MAD!  You can stomp your feet.  But NO hitting. NO kicking."

Sam, still in Mom's lap, kicks his foot against the floor: "Stomp!"

Mom: "Yes, you can stomp your feet when you're mad, like that.  Stomp!  Then I will know how mad you are. But what about hitting?"

Sam: (looking at her seriously) "No hitting." Then he frowns, as if he's trying to figure something out. "MAD!"

Mom: "You mean when you're mad, you want to hit? Yes, I understand. When you feel like hitting, you can do this." She claps her arms around herself in a hug and yells "MAD!"

Sam: (copying his mother, he throws his arms around himself, grabbing his shoulders) "MAD!"

Mom: "Exactly! Self-hug! And tell me how mad you are, say MAD! But what about hitting?"

Sam: "No hitting." He taps her arm gently, experimentally. "Hurts?"

Mom: "That's right. Hitting hurts. No hitting, ever. Now, I think we're both hungry and tired. Let's go get a snack."

What has Sam learned?

And, maybe most important of all, that his mother's love for him is unconditional -- No matter what.

What if your child is older?  You'll want to read:  When Your Child Hits You: A Script