Help Kids Learn the Skills To Set Limits With Each Other

Discipline That Works Helping Siblings Get Along Peaceful Parenting

When tempers flare, it's natural for us as parents to jump in to restore order. Unfortunately, that usually means we intervene on behalf of the child we perceive as less powerful. We say things like "Leave your sister alone" or "Just let your brother have it... He's younger than you!" or "You should know better!" 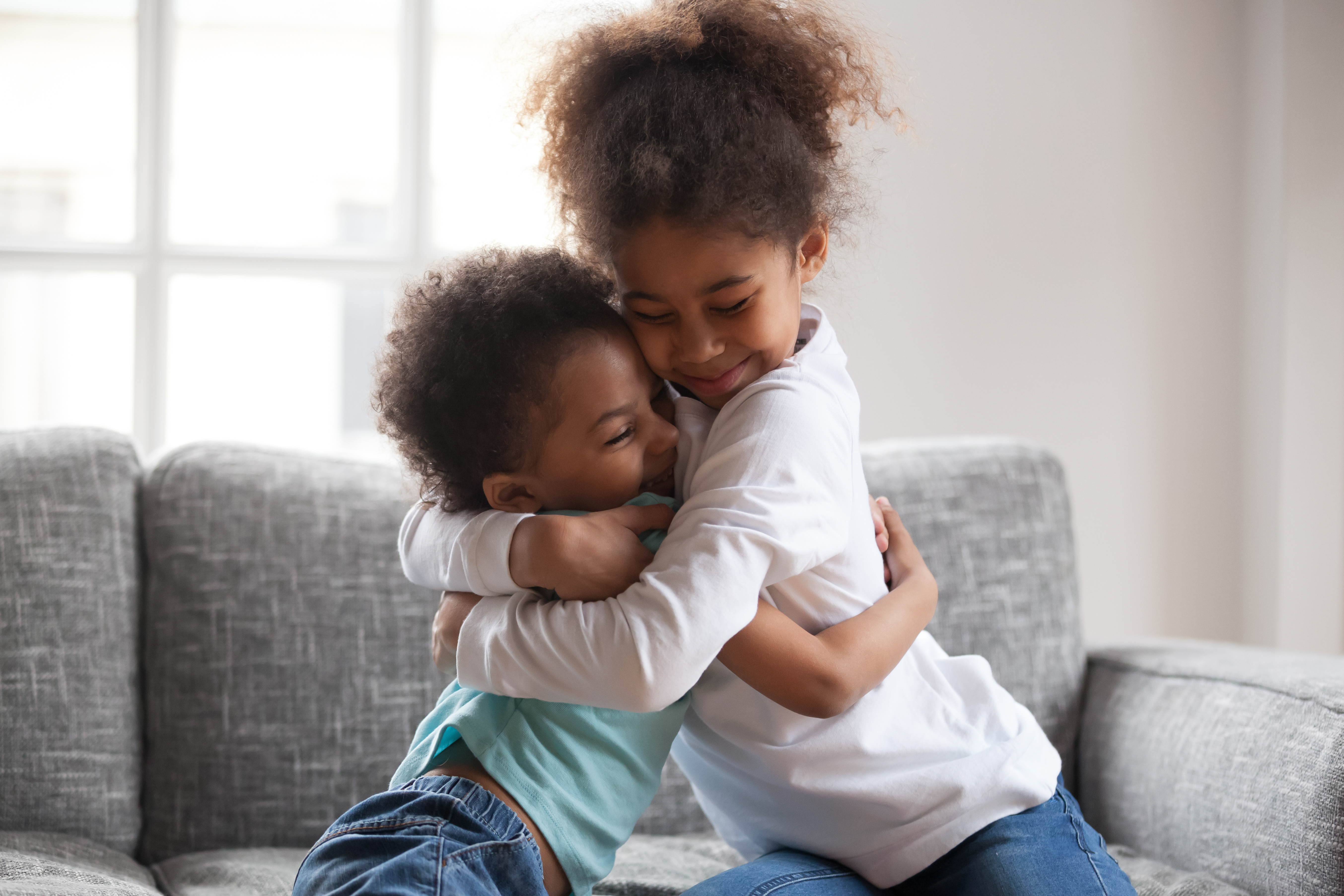 But this approach makes one child wrong, which increases jealousy and resentment. It reinforces the roles of bully and victim. It doesn't help your children learn to stand up for themselves in a healthy way. And it doesn't teach them the skills to work out conflicts.

There will always be times when children encroach on each other, and a limit needs to be set. But the most effective way for us as parents to intervene is to teach our children to set limits with each other, rather for us to jump in as enforcers.

So forget feeling like you have to be the judge and jury. There's a better way. Think of yourself as a coach.

If necessary, you’ll also need to:

Let's apply this approach to some common scenarios.

Eva, 5, is dancing around the room in her fairy wings, waving her magic wand to the music. She crashes into the dollhouse, where MacKenzie, 7, is playing.

MacKenzie: “Oh, no! You ruined everything! I hate you, Eva!”

Mom: “You sound pretty mad, MacKenzie. Can you tell your sister how you feel without attacking her?”

MacKenzie: “I feel mad, that’s how I feel! Eva, I just got it all set up and now you knocked everything down!”

Mom: “Oh, MacKenzie, no wonder you’re upset. That was a lot of work….I’m sorry you have to start over….”

Eva: “I'm sorry, too, MacKenzie. I didn’t mean to …I was just flying….Want me to help you put the furniture back where it goes?”

MacKenzie: “Hmmph! It’s not that easy. I had everything just right.”

Eva: “I could help, though….I could just stand the furniture up again where it is.”

MacKenzie: “Okay….I guess you can do the bedrooms….But be careful!”

Notice what Mom didn't do here? She didn't scold Eva. She didn't make excuses for Eva, either.

Instead, she empathized with MacKenzie. She also set a limit: "Can you tell your sister how you feel without attacking her?”

Now let's see how this would work with a toddler, who is barely verbal.

Jason (4) is shoving Nicholas (2) aside. Nicholas is crying, trying to stand his ground.

Dad: “Is everyone having fun with this game? I see Nicholas crying.”

Jason looks up, wary. Nicholas tearfully shakes his head No.

Dad: “Nicholas, you can tell your brother what you don’t like.”

Dad: “Nicholas, what don’t you like? Can you tell your brother?”

Dad: (Interpreting and getting agreement) “Jason, Nicholas says he doesn’t like being pushed. Will you stop pushing?”

Jason nods and steps aside. Jason’s nod makes it likely that he’ll respect the agreement he’s just made.

What if Jason doesn’t nod? He hasn’t committed himself, and he isn’t likely to stop pushing. Maybe he’s just too mad right now. In that case, Dad needs to continue his intervention.

Dad: “Jason, it looks like you’re not ready to stop pushing. Nicholas is saying he doesn’t like the pushing. He needs you to agree, so he feels safe. Will you stop pushing?”

Jason shakes his head No.

Dad: “Okay, it looks like you really want to push right now, and Nicholas is not for pushing. What else could you push? Your Bobo doll? Here, let’s pull it out for you, so you can push it as much as you want. Can you show me how you much you feel like pushing with your Bobo doll? Wow! That is some strong pushing, Jason! Look at you push!...... Now I need to clean up the kitchen. Nicholas, do you want to come with me and help me make bubbles to wash the dishes? After that, we can all do some roughhousing!”

Notice that Dad helped the nonverbal toddler stand up for himself rather than simply telling the aggressive big brother to leave the nonverbal one alone.  If this is his usual approach, this is a toddler who will feel empowered, and won't resort to biting or other typical toddler behavior. Dad did need to intervene and redirect when one of the children was pushing the other around, but instead of making that child wrong, he simply set a clear limit. And when he needed to get back to work, he separated the children, rather than simply hoping the aggression would stop.

Here's another example with a toddler.

Ava: (not moving) “Ouch!” Kahlil giggles and hits her again.

Mom: “Hey, I hear Ava saying OUCH but I also hear you both giggling. Are you both having fun?”

Mom: “It sounds like you want to have fun together but you aren’t sure you like the hitting… Ava, you can play with him another way. What else could you do?”

Ava: “I think he likes it when I say ‘Ouch!’ Here, Kahlil, hit the couch. That’s right! OUCH!” Both Ava and Kahlil yell “Ouch” and hit the couch, giggling.

Children often begin with play that ends up getting too wild. In this example, the older child didn't know how to set a limit, so the parent supported her to do so.

And here's an example when the parent encourages "repair" and problem-solving.

Seven year old Ryan is in constant motion, bumping into nine year old Chloe as he takes off his shoes.

Mom: “Chloe, name calling hurts. What are you trying to tell Ryan?”

Mom: “Hmm…. I don’t know what happened, but I wonder if maybe your foot touched your sister when you were taking your shoes off…. Chloe, is that what happened?”

Chloe: “I guess so…It sure felt like a kick.”

Mom: “Even an accidental kick can hurt, can't it? Sounds like that hurt. (Empathy.) Ryan, it sounds like you didn’t realize your foot touched Chloe. Sometimes that happens. But Chloe didn’t know you didn’t mean to touch her; it felt like a kick to her and she thought you did it on purpose. So what we have here is a big misunderstanding, that made you upset at each other. Right?”

Both kids look at each other, still mad.

Mom: “I wonder what you could say to each other to make things better?”

Ryan: “I didn’t mean to kick you, Chloe. I’m sorry. But I don’t like it when you call me Stupid.”

Chloe: “I don’t mean that you’re actually stupid; I was just mad.... But you bump into me a lot. I don’t like getting hurt. Can you pay more attention?”

Ryan: “If you promise not to call me names.”

Mom: “That sounds like a good agreement. It’s a rule in this family that we don’t call names, and also that we don’t touch each other’s bodies without permission. I wonder if there’s anything we could do to make it easier for you not to bump your sister without noticing…. Anybody have any ideas?”

Ryan: “I don’t have to sit on the bench with her to take my shoes off…I could sit on the floor.”

Mom: “Wow, would that work for you? What about you, Chloe?”

Notice that Mom acted almost as an interpreter here, helping each child to see how their fight started from a misunderstanding. Even though she did try to understand what had happened, she didn't "blame" either child; she simply set a limit -- No name calling. She also reinforced the family rules of no name calling and no touching someone's body without permission. Finally, she initiated the idea of repair and problem-solving: “I wonder what you could say to each other to make things better?..... I wonder if there’s anything we could do to make it easier for you not to bump your sister without noticing…. Anybody have any ideas?”