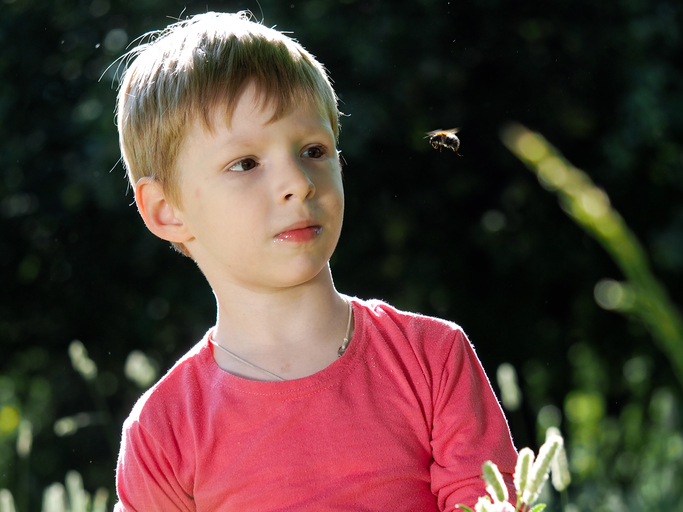 Now that spring is here, he has suddenly become violently afraid of bees. I'm not sure where the fear comes from; he's never been stung and his father and I have never shown any fear toward them. He has always loved the outdoors. But the new fear of bees has him in a panic and no longer enjoying time outside.

Do you have any ideas of how we can help me make him comfortable and less fearful? I'm totally at a loss at how to deal with it. Thank you!

So frustrating, when you want him to enjoy being outdoors in the spring, and he's afraid of bees!

Maybe he saw a cartoon of someone being chased by a bee? But it's just as likely that while your son is focusing his fear on bees, the fears are more free-floating. Maybe they simply derive from the fears that all children have, and his have somehow gotten focused onto bees.

Regardless of where his fear is coming from, right now it is doing what all fear does: making him panic, so he can't think or listen to reason. The way to help him with this is to help him to gradually "face" his fear and realize that he's actually safe. That's the only way fear goes away. If we don't face fears, they gradually expand to take over other areas of our lives. In fact, wherever this fear comes from, it is now curtailing his ability to feel comfortable outside and causing a sense of constant threat when he is outside.

So how do you help he face his fear? You help him to feel it in small bits at a time, while reassuring him that he is safe. He breathes his way through it, and as he does so, the fear that is squeezing in on him begins to evaporate. (This is what happens to all emotions when we allow ourselves to feel them.) So "experiencing" the fear in small doses allows it to dissipate and vanish.

You don't have to start directly with bees. In fact, I would not advise it. And you don't even have to start with "fear" directly. Instead, start with anxiety, which is mild fear. Giggling is one of the best ways to vent anxiety. That's why laughter is so healing to humans. So every day, be sure that you find a number of times to get your son giggling and belly-laughing. The only caveat here is NOT to use tickling, because it seems to be a different biological mechanism and does not provide the same release, and it can make your child feel powerless and out of control. But anything else that gets him giggling will effectively surface and release anxiety and help your son be more relaxed and flexible--and less in the grip of his "phobia."

I would particularly suggest games that dance on the edge of fear.  For instance, play bucking bronco, so that he is just slightly worried about falling off -- enough to shriek with laughter. Roughhouse with him, tossing him around physically. You'll know you're on the right track if he's giggling.

I would also suggest letting your son laugh at you for your fears. If he's afraid of the doctor, let him give you shots, and exaggerate your fear in a way that makes him laugh. Also, pick something that he is NOT afraid of, and pretend to be very frightened of it. Make it something harmless. Be silly and over the top in your reaction -- not actually panicky, but more goofy, so that he laughs at your reaction. The goal is to get him giggling as much as possible. Let him reassure you. You could try different things. Start with a rock, move on to a butterfly, and then maybe a roly poly bug.

In the meantime, when your son expresses a fear of bees, empathize. It won't work to talk him out of it, and telling him there's nothing to be frightened of would just make him feel ashamed. But once you empathize, you can reassure him: "They're scary, huh? I understand. I'll keep you safe, Sweetie....Don't worry, they won't come to us. They only sting to defend themselves so we'll leave them alone." You will probably have to stay close to him while he's outside. Offering him reassurance is a healing process, because it is an antidote to the fear that's locked up inside him, making him feel alone and scared.

After a week or so of helping your son laugh as much as possible each day, move on to "play" about bees. Try to come up with things that get him giggling about bees. Start by drawing a bee, when the two of you are doing artwork together. Be silly about it by giving him the opportunity to give it a silly name, like "Silly Bee" so-called because he always gets lost, or he loves honey so much he forgets what he's supposed to be doing. Not only does this get him laughing about a topic that holds great anxiety for him, but you are moving the bee from a position of threat and great power to one of silly powerlessness.

You can move on then to humanizing the bee. If he likes dinosaurs, give SillyBee a dinosaur best friend. When he gets lost in the honey, his mother misses him and goes in search of him. As you draw and discuss the bee family, pay close attention to his level of comfort. If he seems very anxious, breathe with him. Or simply back off a bit. Or best yet, find a way to make the whole thing more giggly, which will relax him.

What if the presence of the bee drawings makes him panic? Let him crumple up the drawing and throw it in the trash, which will be empowering for him. If he's still upset, hold him and speak soothingly. Tell him that you will keep him safe. That you know he is frightened, but he's safe. Let him sweat and cry and offload all that panic. Afterwards, he will be much more relaxed, about bees and about everything else.

Once your son is able to relax about the bee drawings, begin role playing bees with him. Ask him if he will be a bee and chase you. Play the part of being scared in a goofy, over-the-top way. If he finally catches you and "stings" you, ham up your fear reaction but don't emphasize pain as a response. The goal is to get him giggling and help him feel powerful.

Then, reverse roles. You take on the role of bee, but be hopelessly incompetent. Bumble. Fly into things. Brag about how you'll catch up to him and sting him, but never come close. Or just come close enough to get him screeching with laughter, and then stumble.

Finally, you can buy several toy bees at the store -- preferably a mom, dad and boy, to "humanize" them. Introduce them to your son as a bee family. Don't make him touch them or interact with them if he doesn't want to, but if he's willing, work with him to make them a little house or beehive. Talk about them in friendly terms, for instance, how wonderful they are to make honey for us. Leave them out, so that he gets used to seeing them.

By now, your should be fairly relaxed about encountering bees outside. If you're lucky enough to find an actual dead bee, put it in a jar and let him observe it, and once he feels comfortable, actually examine it using tweezers. When he sees a live bee, you will probably still need to put your arms around him and stay close while you observe together. But by now he should be able to breathe his way through his anxiety without it developing into a full-fledged panic.

Good luck, and here's hoping you and your son have a lovely summer!