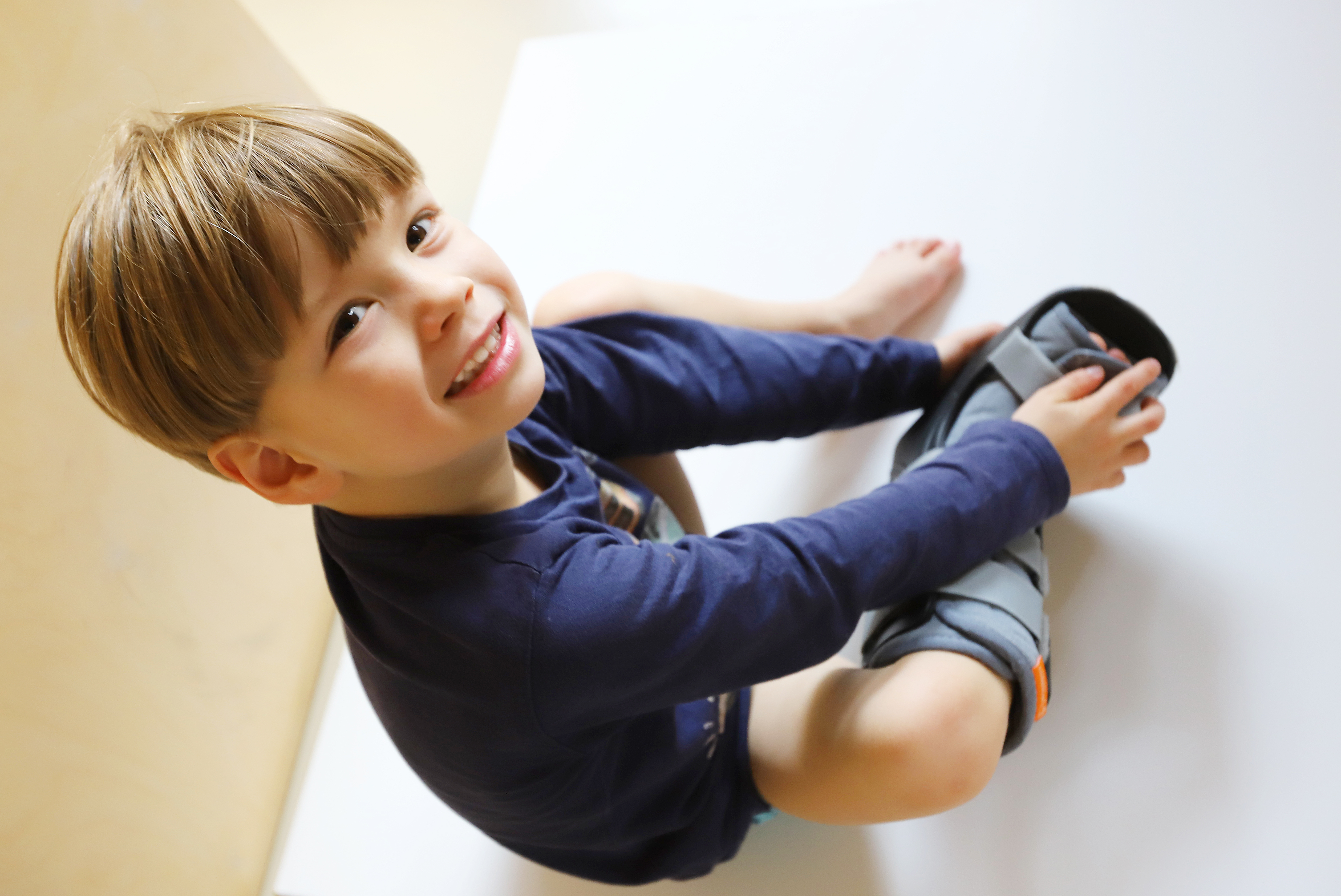 I have a 5 yr old who is starting kindergarten. Because of a stroke suffered as a baby he has right sided weakness and wears an AFO on his right leg and a brace on his right arm. He also sometimes drools out the right side of his mouth, but he's getting much better at catching that.

Just recently he's been worried that the kids are going to tease him when he goes to school because he'll be the only one with braces. In truth, his kindergarten will have quite a few special needs kids in it and they even have an occupational therapist on staff because of the integrated classes.

I'm just wondering what I can do to help him prepare emotionally. He will be caught in the middle because he isn't classified as special needs. He doesn't have an IEP or qualify for school based therapy services. He is very intelligent and can already read and do math beyond the Kindergarten level, but physically he falls way behind. I worry about his self esteem and want to do everything I can to help him get through school in an emotionally healthy way.

Today it got worse. They were playing a chasing game on the playground. The girls were chasing the boys. My husband asked "so did any of the girls catch you?" and Noah immediately went into a 25 minute meltdown because he realized that the girls caught him, but not the other boys. He was sobbing and crying in his meltdown way about how "I am the slowest runner and the girls caught me but Grant got away and that's not fair and I don't want to play with them ever again because I can't run as fast and they're mean!" Well, truthfully, he will play with them again and they're not mean and the next time everything will be fine, but I'm more worried about how episodes like this will add up over time to knock down his self esteem and affect the person that he becomes. THANKS! -- Mattie

I understand why Noah's worried about starting kindergarten. All kids are anxious about beginning school, and of course being different makes it all the more scary.

Therefore, my first recommendation is that you address his anxiety more generally, as you would with any child beginning kindergarten. That means you want to familiarize him with the school, describe what his day will be like, mention kids he will know in his class, talk in warm terms about his teacher and how great she will be, etc. This website has an article you might find helpful called 15 Tips to Prepare Your Child for the New School Year.

My second suggestion is that you let Noah describe to you what he is looking forward to at school, as well as any worries he has about what it will be like. Empathize with his worries rather than brushing them off. Acknowledge that it can be hard to be different. He needs to know that his full range of feelings are acceptable, and that he can share them with you, so that he doesn't feel he is being left to cope with these tough feelings alone. It's hard enough being the only boy who gets caught by the girls, it's even harder if you don't have anyone at home to grieve with about the unfairness of it all. Let him know that he can talk with you anytime about what's happening at school.

When he describes specific things that worry him ("What if kids tease me?"), help him brainstorm about ways to handle it. Noah has probably already had to answer "Why do you have that thing on your arm?" many times, but you can help him take it a step further so he has five pat answers and feels prepared for various comments. It will increase his sense of competence if he comes up with answers himself, rather then you telling him what he should say. You can make suggestions while you're brainstorming, of course, like "What if you answered that he was just jealous because you're bionic?"

If he seems particularly worried about a specific scenario, you could try role playing with him so he can build his confidence. For instance, he might need a little practice if he's going to say "I LET that girl catch me. She's cute!"

Another way to inoculate him against teasing is to help him develop one on one friendships with the boys who will be in his class. That way, if someone teases him, his friends will stick up for him. If he's generally well-liked, it's unlikely that he'll be teased. So the more social skills you can help him develop, the better. And the more you can set up playdates with the boys in his class at the beginning of the year, the more bonded he'll be to the other boys, and the less likely to get picked on.

You might also make an appointment with his teacher to ask how she handles the integration of special needs kids into the classroom. She's obviously given this some thought and probably has ways of talking with the kids that facilitate tolerance.It might help your son to hear about this, after you meet with the teacher.

Finally, I want to offer you a little reassurance. The foundation of high self esteem is being loved and accepted for who you are. The raw material, though, is actual achievement, so kids do need to actually accomplish something to feel good about themselves. Luckily, Noah is smart. His intelligence will take him a long way, even when he can't keep up physically. With your help in developing your child's emotional/social intelligence, and his own innate brains, Noah can be well-liked and well-respected by his peers. I suspect that even while he rails against the unfairness that he's the slowest runner, he can still understand that nobody can be good at everything, and he's good at some things that are really important: being a nice person, a hard worker, a good friend, and a good student.