I received a question from a reader recently: 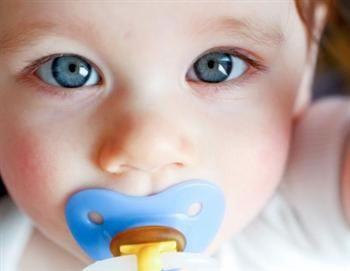 "Should a natural mama ever consider using a pacifier?"

I know there are experts who disagree with me, but the short answer is Yes. Every baby is different and some simply have very strong comfort sucking needs. Most of the time, those needs are met by breastfeeding, but there are plenty of breast-fed babies who still need to suck their thumbs. And while a thumb is definitely a more “natural” choice than a pacifier, there is one clear way in which a pacifier trumps a thumb. But I’m getting ahead of myself.

Pacifier manufacturers were given a blank check recently when the American Academy of Pediatrics released a recommendation that babies be given pacifiers at naptime and bedtime through the first year of life because studies show that pacifiers decrease the risk of SIDS.

The recommendation specifies that pacifiers should not be introduced until after one month of age in breastfeeding infants, when, presumably, nursing is well established and the pacifier won’t cause nipple confusion. The artificial nipples of both bottles and pacifiers are easier for a baby to latch onto than breast nipples, which may undermine an infant’s ability to correctly latch onto the breast. In addition to giving mom sore nipples, babies can get so frustrated and upset they refuse to nurse.

Are pacifiers necessary to protect against SIDS?

However, many breastfeeding experts are challenging the AAP recommendation. Their argument? SIDS is thought to result from an infant falling into too deep a sleep before his body has gained the ability to regulate its own arousal. Sucking on a pacifier while sleeping keeps the baby from sleeping as deeply, thus guarding against SIDS. However, Mother Nature has already designed the perfect way to help babies regulate their arousal systems during the early months of life: waking frequently at night to nurse, and sleeping near Mama. In fact, co-sleeping and breastfeeding have both been shown to have a protective effect against SIDS, because the baby’s physiology is kept at a higher level of arousal. His sleep cycles even parallel his mother’s. SIDS was probably unknown before separate bedrooms and cribs were invented, and as both co-sleeping and breastfeeding have increased since 1992, SIDS has decreased.

Given that pacifiers do not offer any particular benefit against SIDS for babies who are already breastfeeding, most breastfeeding experts continue to advise against pacifiers, even after nursing is well established. Why? Frequent nursing is the best way to create a good milk supply, which remains a necessity long after the first month. Babies drink 1/3 of their daily food intake during their night feedings, so using a pacifier to calm a crying baby at night can lead to poor weight gain as well as plugged ducts, mastitis, and a decrease in milk supply. In other words, pacifiers can easily sabotage nursing.

Bonding experts also worry that a baby’s cry is meant to initiate connection, and pacifiers could take the place of love. From a bonding perspective, nursing is not just about feeding a baby, it's about emotional nurturance, or just plain comfort. When a baby cries, she needs to be held and comforted.

In answer to the worry that the baby is just "using the breast as a pacifier," most natural mamas would retort “Isn’t that how nature designed humans? Which would you rather your baby see as her source of comfort: You, or a piece of plastic?”

So if a pacifier is a risk factor for breastfeeding and can even undermine mother-child bonding, why do I say that a natural mama might consider a pacifier?

Simply because I think being dogmatic and judgmental is a disservice to mothers. We know that every baby is different. Some babies need much more comfort sucking than others. Even some breastfed-on-demand babies suck their thumbs or fingers. In fact, some infants suck their thumb or fingers in utero and come out ready to find their thumbs again.

You might argue that a thumb is more natural than a pacifier, and I would have to agree. I would also point out that in the middle of the night, a baby can always find his thumb, when he almost certainly will not be able to locate his pacifier by himself. Toddlers who suck their thumbs are famously the best sleepers. However, neither thumb nor pacifier should be used past the age of five, when the arrival of the permanent teeth nears. And that’s where the pacifier trumps the thumb.

The pacifier habit is far easier to break than the thumb habit, simply because it doesn’t stay on your child’s hand, beckoning. Pacifiers get thrown away, the child mourns, has a tough week, and goes on with her life. But the siren song of the thumb is always there, leading to feelings of shame and anxiety as the poor child tries hard to please her parents, peers and the dentist by giving up her comfort habit.

Of course, there are many kids who give up their thumbs easily. I personally remember doing so, and I would absolutely choose a thumb over a pacifier for my own children. (I breastfed each child well into toddlerhood, and early on with each I rooted for them to find their thumbs, but they never did.)

What is the pacifier made of?

If you’re considering offering your baby a pacifier, there’s one other critical element we haven’t discussed. What is the pacifier made of? Many pacifiers have BPAs in them, although I predict their rapid extinction given all the recent publicity. But other pacifiers aren’t necessarily safe, either. Latex pacifiers leak low levels of nitrosamines, a known carcinogen. Some pacifiers are still made with diisononyl phthalate (DINP) or phthalate esters, which can be released during sterilization. Silicone pacifiers were considered safe for a long time, but are now highly suspect. The only safe pacifier on the market seems to be Natursutten’s rubber pacifier, which has no synthetics or additives, but the instructions say they have to be replaced every five to seven weeks to stay safe, which is costly and inconvenient. And while the Natursutten is currently claimed to be safe, there’s always the problem that what's considered safe today might not be considered safe tomorrow. After all, most of us hadn't heard of BPAs a few years ago.