In this season when we're spending money on toys, we'd naturally like to make sure those toys are beneficial for the child, meaning they will be good for the child's development and will sustain the child's interest over time. Of course, "developmentally appropriate" will mean something different at each age, and includes physical, cognitive, social and emotional development. But what do scientific studies say about the kinds of toys that nurture children's development in general? 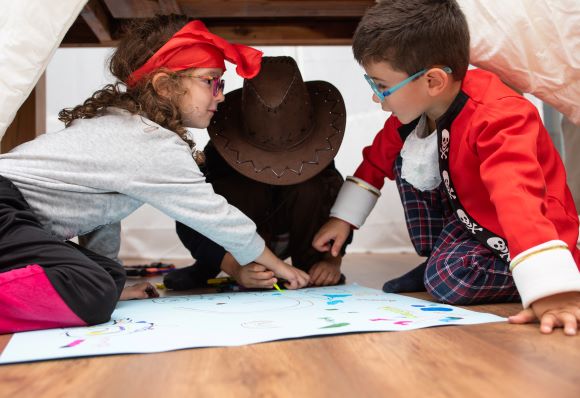 The answer is that any toy that encourages play is good for a child's development, so we need to look at the wealth of research on play. Studies consistently find that children thrive when they have the opportunity for play that is:

The Timpani study especially recommends flexible, open-ended Construction toys such as hardwood blocks, Legos, TinkerToys, and Magna-Tiles, that encourage child-directed building and problem-solving, and Replica play toys such as small people, animals, or vehicles that encourage children to create elaborate, make-believe scenarios, alone or with others.

Many preschool teachers will tell you that children who mimic specific characters from screens play less creatively, because they recreate the stories they've watched instead of inventing their own. So in addition to limiting screens, it's a good idea to avoid characters from shows or movies when you select toys.

The final takeaway from play and toy research is that children engage in a higher quality of play when they have fewer toys. Instead of becoming overstimulated and moving from one toy to the next, they engage in deeper, more sustained and more creative play. (Here's one research study on this from Infant Behavior and Development: "The influence of the number of toys in the environment on toddlers’ play.")

So don't be afraid to buy your child a new toy for the holidays, but consider carefully what you're buying. Get into the habit of cycling toys in and out of the play area, so your child can play more deeply. And remember that toys that your child uses WITH you are the best toys of all!