How To Intervene In a Sibling Fight 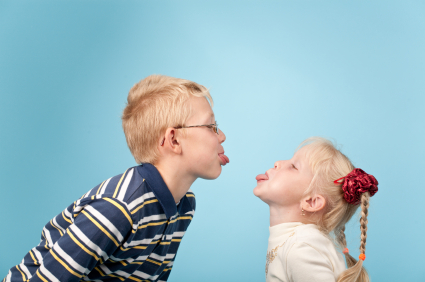 
What should Mom do?

Mom:  (Thinking) Hmm...should I get involved?  I'm busy cooking dinner, and sometimes, they work it out.  But in this case, it sounds explosive.  Maybe this is a good chance to teach them better skills to work things out together.

Turns off the stove, takes a deep breath and reminds herself to stay calm.

Research shows that one of the most important things parents can do to help kids learn to manage their emotions is to stay calm themselves. Kids need to experience their parents as a "holding environment" -- a safe harbor in the storm of their turbulent feelings. If we can stay calm and soothe our children, they will eventually learn to stay calm themselves, which is the first step in kids learning to manage their feelings.

Mom, speaking as she enters Jane's bedroom: "I hear some loud, angry voices. What's going on?"

Mom knows better than to try to figure out who started it, who provoked who, or who hit who back first.  Not only does that never work, but it sets kids up to be victims and bullies. She knows always to treat both kids the same when she intervenes.

Mom: (empathizing with both kids)  "You two sound really upset!

Mom: (Taking a deep breath to stay calm, and setting a limit.)

"The rule in our house is that we treat each other with kindness and respect. I hear screaming and hurtful language.  Let's all sit down.  Come on Charley, sit down right here next to me.  Jane, right here on my other side.  Now, let's everyone take three deep breaths so we can calm down and listen to each other......one....two.....three.  Ok, I want to hear what's upsetting each of you so much.  One at a time.  Last time, Charley went first.  This time, Jane goes first.  Jane, what happened?"

Jane:  "Charley knocked down my animal zoo.  I worked so hard on that with Sophie.  We were going to play with it again tomorrow."

Mom:  "Charley knocked down your zoo and you're really mad, huh?  I see all the blocks and animals all over.......Jane, anything else happen?"

Mom:  "You want Charley to leave your room when you tell him to. That was our family agreement, you're right......Charley, can you tell us what happened from your perspective?"

Charley:  "Jane messed up my lego ships! She's not allowed to touch them. She went in my room to get them.  She broke the rule too!"

Mom:  "So you're mad that Jane went in your room and messed up your lego ships.  And you came in her room to tell her?"

Jane: "But he came in and wouldn't get out, and he wrecked my zoo!"

Charley: "Ok, I knocked over the zoo, but that was because she called my lego ships stupid! I invented them myself!"

Mom: "Let me see if I got this right. Charley, you were very angry that Jane went into your room and played with your lego ships.  Then she called them stupid and hurt your feelings.  Then she told you to get out of her room.  Is that right?"

Mom:  "And you were so mad, you knocked down her zoo?"

Mom:  "Ok, thank you for telling us.  I see you are working hard to stay calm so we can work this out.  Jane, let me see if I understand.  You were playing and Charley came in very angry and you told him to leave, right?"

Mom: "And he was so mad, he knocked over your zoo?"

Why go through this?

Mom:  (Empathizing, and then helping each child to reflect on what the other child felt and how each one contributed to the problem.)

"I hear how angry you both are.  Charley, I see why you're mad if Jane was playing with your lego ships and messed them up, and it sounds like it hurt your feelings when Jane called your lego inventions stupid.  Jane, I see why you're mad that Charley knocked down your zoo.  You're both hurt that your things got messed up, right?" (The kids nod.) "Often when we're hurt, we get mad, right?  So you both got pretty mad and blamed each other, right?"

"Now I want each of you to imagine what the other one was feeling during the fight.  Jane, what do you think Charley was feeling when he came in your room?"

Charley: "You know you were trying to make me feel worse!"

Mom: "Charley, Jane is talking now, and you and I are listening and breathing so we can stay calm....Jane, what do you think happened inside Charley when he came into your room?"

Mom: "Hmmm....Do you think there was anything different you could have done?"

Jane: "All right, I know. I could have apologized for playing with his legos. I know. But he plays with my things too."

Mom: "Right now we're talking about what just happened. Is there anything you could have done to make things go differently?"

Jane: "Well, he's the one who knocked down my zoo!"

Mom: "Yes, he did.  But right now I'm wondering if you see anything you had the power to do that would have made things unfold differently."

Jane: "I could have been nicer and apologized.  I didn't have to call his legos stupid."

Mom: "So you think that if you had apologized when he first came in, he might not have gotten so mad?.....Charley, if Jane had done that, would that have changed how you felt?"

Charley: "I would still have been mad that she messed up my legos.  But I wouldn't have knocked down her zoo."

Mom: "Great, thank you Charley.  Jane, do you hear that? He was mad you played with his legos, but if he thought you were listening and making things better, he would have had an easier time controlling himself.  Right?"

Mom: "So Charley, what do you think Jane was feeling during your fight? And what could you have done differently?"

You can see where Mom is going here. Next, she'll ask each child if there is anything they can do to repair things with the other child. By the end of the conversation, Charley and Jane will be listening to each other. They might even work together to rebuild the zoo.

Contrast this outcome to the result of the more usual parental intervention, in which Charley, and maybe Jane too, would be yelled at and given a "consequence" to punish them, in the hopes that this would motivate them to be nicer to each other. Would sibling resentment and fighting be likely to increase or decrease after that?

Of course, you can't do this every night. Mom is way behind on getting dinner on the table. But the good news is, you don't have to.  If you intervene by teaching conflict resolution for a few months, your children will begin to learn the skills you're teaching. And you'll be amazed to see them (maybe with some prompting from you) begin to work things out without your intervention. You'll probably find that everyone in your family is calmer, and a better listener, once you get this habit going.  Even you!

Looking for help with younger kids? When the 3 Year Old Hits the Baby »

Helping Siblings Get Along »