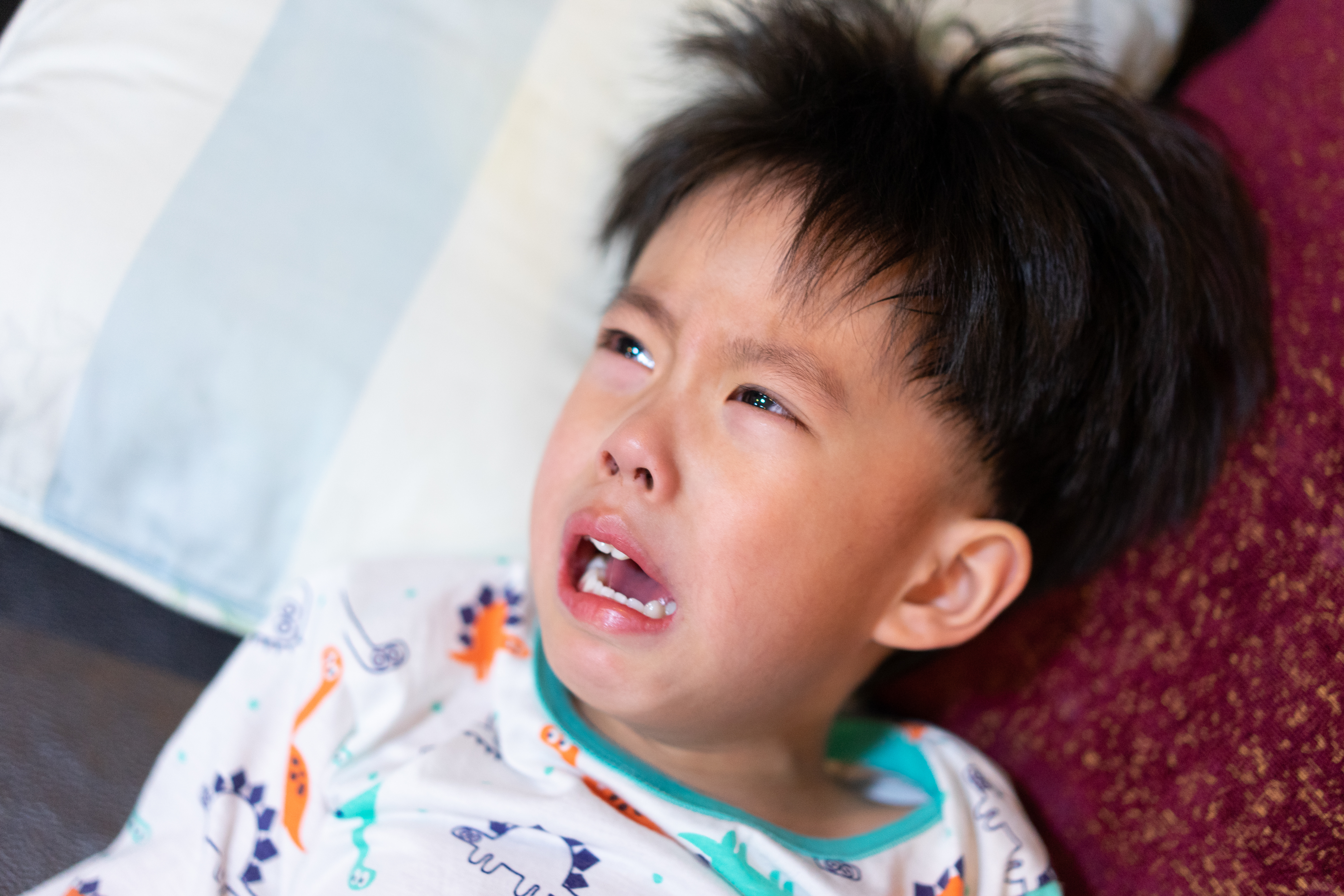 We are having a problem with our 18 month old son hitting his head when he is frustrated or can't have what he wants. He will head butt us (or just hit us) if we tell him no, and he will hit his head, really hard, on anything around him, including hard surfaces like the floor or tables etc. I try to not react to tantrums like this, but I'm worried about him hurting himself. He has already given himself several nasty bruises and a cut lip. With regular hitting we always hold his hands, tell him no very firmly, and if he continues, he goes to time out. We have been doing this for about 2 months, but the hitting is not letting up.

I would love some advice! Thanks, Karen

Dear Karen,
I can see why you're worried about your son's hurting himself. Your son is still very little. He doesn't have the verbal capacity to express himself very well. He has big feelings and wants whatever he wants at that moment with great passion. It will take him years to learn to manage his emotions; right now they overwhelm him and he can't help himself: he explodes with frustration, hitting and tantrumming. We all know what that feels like -- in fact, most of us have had the experience of bursting out yelling even as adults!

I wonder what you mean when you say that you "try not to react to his tantrums." You certainly don't want to give him whatever he wanted that caused the tantrum -- meaning the candy he is demanding, for instance. That teaches him that tantrums are the way to get what he wants. But the idea that parents should ignore tantrums is a myth. That strategy is misguided; it just causes the child to tantrum more frequently. If you think about it, this makes sense. He's tantrumming because he has such big feelings and no other way to express them. If you ignore him, he is doubly frustrated because not only is he frustrated, now he has also lost his connection with you. If he felt that you understood what he was feeling, he might not need to act his feelings out so graphically.

Of course, he will sometimes need to blow off stress, which means he will have a meltdown. Toddlers just need to cry sometimes. They're nature's way of helping young children who don't yet have much frontal cortex, so they can let go of all those upsets. (Later, he'll be able to put them into words and make sense of things so he won't need to tantrum, but his brain can't do that yet.) If you can stay close to him and reassure him, and comfort him afterwards, it will help him enormously. What he really needs at those times is your attention and love, which helps heal that hurting place inside him.

And no, it won't make him tantrum more, as long as he is also getting plenty of your attention when he isn't tantrumming. If a little one has to resort to tantrumming for attention, then he is clearly sending an SOS that he isn't getting enough attention! You will be amazed at how much his behavior improves once he's had a good cry with you as a compassionate witness.

Now, let's talk about those timeouts. Research shows that timeouts make children's behavior worse.  They make children feel worse about themselves and they erode your relationship, which is your only source of influence with your child. In my professional opinion, they are probably worsening the behavior that is bothering. Please stop using timeouts, and instead, when your son is upset, begin using time-in, where you sit with him. Here's an article on Time-In. You can find more information on timeouts in this article: What's wrong with timeouts?

But let's get back to your questions. All toddlers tantrum. What can you do to stop your son from hitting you during those tantrums, and to stop him from hurting himself when he tantrums?

1. Start with empathy. If your son feels understood, he is less likely to bang his head or to hit. "You are so mad....You wish you could have that...."

2. If he tries to hit you, move out of reach. If he follows you to hit you, you may need to gently hold his hands while you say calmly "You're so mad. No hitting. Hitting hurts. Say MAD!"

3. Create safety. Under your son's anger are more vulnerable emotions -- tears and fears. In fact, the anger is just his fight or flight response. He's protecting himself from those emotions. So if you can help him show them to you, he won't need the anger any more. That means that he may cry, or flail, but he won't be hitting you or banging his own head.

How can you help him to cry? Create safety. Soften your own heart and empathize with his pain. Tell him you understand. If he'll let you, hold him. If not, just stay close and say "You're safe. I'm right here." Keep him enveloped in your love, making occasional soothing comments so he knows you're there while he tantrums: "You are safe....I'm right here..... It's okay, everybody needs to cry sometimes....You're doing hard work...whenever you are ready I will hold you.

4. Don't lecture or try to reason with him while he's showing you his big emotions. Just let him cry and struggle, which will let off all the tension he's feeling, especially with your loving presence to help him feel safer.

5. If he yells "Go away!" then take a step back and say "I am moving back, away. But I am right here if you need me. I won't leave you alone with all these upset feelings."

6. Eventually, he will melt into your arms and just sob. Your job is just to let him cry as long as he needs to, offering him a compassionate safe haven. Don't try to talk while he is crying. Just summon up all your compassion and hold him. Afterwards, you'll be amazed at how much happier and more cooperative and affectionate he is.

If your son has been storing up "yucky" feelings, the only safe way to express them is with the person he he feels safest with. So he hits. When you don't let him hit you but you also stay loving with him, the anger vanishes and the hurt, sadness and fear are released, which is what he needs.

Most parents find this challenging at first. It's hard to just be a compassionate witness for someone else's pain, particularly our child's. How to stay calm yourself? Use the same loving, nurturing tone to remind yourself that everyone needs to cry sometimes and you are giving your child a priceless gift: the loving acceptance of the full range of his feelings, and an opportunity to heal all that yucky emotional stuff he's unloading.

When he's done, he will want to be close to you and reassured of your love. But -- full circle to where we began -- by giving him this safe space to express himself you will find that his tantrums lessen in severity so that he doesn't need to hurt you, or himself. And you'll find that your relationship with him will deepen. In fact, as much as this attentive parenting is a gift to your son, it is even more of a gift to yourself, because your son will become much more cooperative, not just during the "terrible twos", but throughout his childhood.

Good luck, and enjoy your little guy. He'll be through this phase and on to the next before you know it!
Dr. Laura