Courage doesn’t mean not being afraid. In fact, in many situations that might qualify as stupidity. Courage means being afraid and doing the right thing anyway. 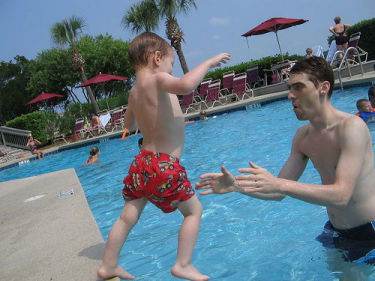 Parents of toddlers and preschoolers often worry about their children's fears of thunderstorms or merry-go-rounds, but in our culture, courage is usually moral, rather than physical, and our children are tested constantly.

Of course, there are times when kids need your help to summon up their physical courage: when your toddler is frightened of riding the ferris wheel with you, or your five year old is afraid of the dark, or your seven year old doesn’t want to get on a horse, or your nine year old doesn't feel ready for sleepovers. But handling these frightening situations is pretty straight-forward:

They can learn to horseback ride next year.

2. Stay calm yourself, and empathize with her feelings.

3. Communicate that you will keep her safe.

4. Help your child to problem solve.

Would it help if he knew he could call you from the sleepover? Could he start getting to know the horse at first by grooming it, rather than climbing up into the saddle?

5. Encourage your child to turn his fear into excitement.

Moral courage is more complicated. Luckily, it isn't something we're born with. Courage is something we can develop, cultivate, learn how to summon up, by trial and error, by facing scary situations, choosing what's right, and finding out it works.

The good and bad news about moral courage is that your child’s performance in difficult situations depends mostly on you. Not on what you say, or drill into your child, about what’s right and wrong. Those discussions are important so that kids clearly understand what’s right and wrong and why we make certain choices, but they aren't what matters most.

Research confirms what we observe daily: most humans don’t always do what they know is right. Integrity cannot be taught. Whether your son or daughter will summon up the internal fortitude to do what’s right will depend on who he or she is as a person, and that, luckily, you can impact tremendously.

In fact, the little test below – about you – can accurately predict your child’s behavior.

Is it hard to believe that this test can predict your child's behavior? Researchers confirm that children learn what we do, not what we say.

So the first part of helping your child to develop moral courage is to develop your own.

The second, of course, is paying attention to all the teachable moments.

And the third is remembering that kids develop courage along with maturity, over time. Don't take it too hard when your child doesn't display the courage you'd like. Just having a parent who thinks about these things is taking her in the right direction. Give her time.

"Courage is not the absence of fear, but rather the judgment that something else is more important than fear."
-Ambrose Redmoon