Beyond Discipline for Preteens

"What kind of discipline works for preteens? What I was doing before (consequences) certainly doesn't work any more. It seems to make him more defiant and rude, and we all end up yelling. He doesn't do his homework. All he wants to do is skateboard or play computer games with his friends." 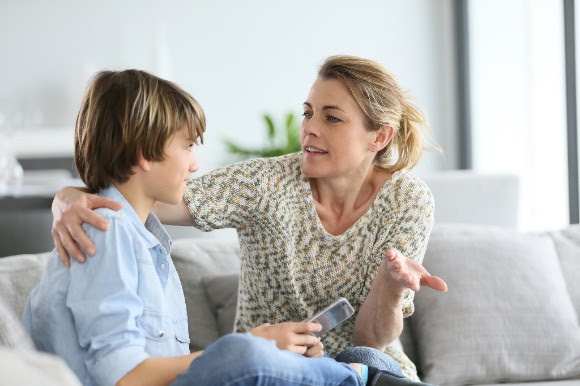 The preteen transition is a tough one for most parents. Kids start to be heavily influenced by their desire to be respected by their peer group and that often conflicts with the standards we set at home.

Meanwhile, we lose the automatic respect that most young children feel for their parents, and we have to start earning it. Parents who rely on punishment to control their kids (including timeouts and consequences) realize in the preteen years that it no longer works. In fact, we learn that it's actually impossible to control them when they're out of our sight, which they often are.

Many parents worry that they have to raise their voice constantly, but their influence is still waning. Unfortunately, if we've relied on punishment, we've neglected to lay the groundwork that will insure that a preteen "acts right." That groundwork includes a strong parent-child relationship so the child really WANTS to cooperate, and doesn't want to disappoint the parent. It also includes empathizing with feelings so the child gains the ability to regulate his emotions, which lets him regulate his behavior.

Unfortunately, conventional parenting, which includes punishment, actually erodes the parent-child relationship so the child is less motivated to cooperate. And punishment doesn't help children learn to regulate their emotions, so they have less self-discipline.

By contrast, kids who aren't punished, but are instead lovingly guided to make reparations and solve problems, are earlier to develop internal discipline and a strong moral sense.

So it works a lot better to just begin with respectful, positive guidance right from the beginning. That raises preteens who are respectful, considerate, responsible, self-disciplined and delightful, right through the teen years.

But what if you've been using punishment (such as consequences) and your child is now ten and acting disrespectful? It isn't too late, but you have some catching up to do. Here's how.

1. Start by committing to model a respectful tone.

If you're yelling, stop. Really. Kids lose respect for parents who yell, so you have less influence. They also learn that yelling is how to express emotions and solve problems, so they yell, too. It's not necessary to yell to get your child's attention if you have a good relationship.

2. Focus on strengthening the relationship

...so that when you set a limit ("Homework before screen time!") or express an expectation ("We speak civilly in this house") your child wants to cooperate. Make sure you have one-on-one time with each child every day, in which you mostly listen. If your child is "too busy" to connect, give foot massages and connect through her passions, for instance by listening to her music with her. You can't hope to have any influence if your kid doesn't enjoy being with you.

3. Help your child develop good judgment by reflecting on her actions.

What about "giving" consequences? That's punishment.

"You should have done your homework last night. Next time I see you doing a rush job in the morning like this, you lose your screen time that day."

This parent is concerned, naturally, about her child. But this approach has some unintended consequences. First, the child feels controlled, so she's more likely to rebel against you. Second, she doesn't end up taking responsibility for her behavior -- she just gets mad at how unfair you're being, and blames you.

What if, instead, you empathized, asked her questions and "wondered" to help her reflect on the effects of her actions?

"I see you're trying hard to get that math homework done this morning. Not much fun to have to rush like that, is it? It also means it's harder to do your best work and catch your mistakes... Let's figure out a way for you to finish your homework at night so you don't feel so stressed in the morning....."

The natural result of not getting her homework done the night before is having to rush to do it in the morning. If you can help her notice that effect herself -- instead of using threats and control, which will just make her rebel -- she's more likely to take responsibility to act on that knowledge.

What if your child doesn't step up and handle himself responsibly? Very common, especially where screen usage is concerned. You'll probably need to make rules to limit screen time so homework can get done.

5. Agree with your child on non-negotiable family rules.

Discuss your family rules and make a written agreement. Stick to the important stuff, like respectful tone, homework, family dinners, and screen time limits. At the same time, discuss what will happen if rules get broken. How will your child make a repair and restore your trust? You'll find that when you discuss this in advance kids often volunteer heftier penalties, and thereafter are usually more motivated to follow the rules. One of the keys to getting preteens to cooperate is letting them have some say in their lives.

6. Focus on teaching your child to repair her mistakes.

Worried that your child isn't being "held accountable"? Introduce the concept of reparations. This isn't a consequence (punishment) that you impose. This is when you ask your child what he can do to make the situation better now. For instance, if he says something mean to his sister, he'll need to do some repair work on that relationship. If he breaks something, he'll need to help pay for a replacement. But remember that if you think up the reparation and force it down his throat, it only makes sense that he'll reject it. Instead, let this be an empowering opportunity for him to learn that we all make mistakes -- and we have the responsibility to take action to make things better. It's like spilling the milk. We don't cry over it, and there's no blame or shame -- but we do have to clean it up when we spill it.

When we worry about our child, we often intervene to protect her from natural consequences. So if your child can't seem to remember to turn in the permission slip for the class trip, you might want to help her brainstorm how she can remember when she gets to school tomorrow. But if she forgets, she'll learn an invaluable lesson. Don't rescue her.

Assume your child will test you to see if you're serious. Stay cheerful while you keep enforcing the limits. For instance, be there during homework time and be sure your child stays on track with it instead of spending the time playing computer games with friends. If you have relied on punishment rather than helping your child develop inner discipline, this could take some time (weeks or even months). But after awhile of enforcing your rule, it will become a habit, your child will reap the benefits of it, and he will begin to do it on his own.

This transition takes time and patience. But you'll end up with a more cooperative, respectful and responsible kid, and a sweeter, stronger relationship with your child. That's a true gift any time, but especially before the teen years start.

Want more? Check out the discipline section of the Aha! Parenting website, and also the section on preteens.

Click here to watch Dr. Laura's video "How to Get the Behavior You Want Without Discipline."